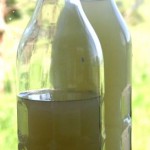 Apple cider vinegar is said to be a natural remedy for many ailments. In 400 B.C.E Hippocrates (the father of modern medicine) knew about apple cider vinegar's antibiotic properties and recommended it to his patients for its healing properties. Since then it's been valued by many cultures right up to modern times.

Because science allows us to break things down into their component parts in order to understand how things work, I think too often scientists only see things as their component parts, missing the whole concept of the synergy found in nature. Everything has the potential to be more than the sum of its parts.

The health benefits of apple cider vinegar will vary depending on the ingredients and process used in making it. Commercial production can use wood shavings, and other vinegars as the base (speeding fermentation), changing the makeup of the end product. You'll get the greatest health benefits from apple cider vinegar that is made from organic apples, fermented using traditional methods, raw (unpasteurised) and unfiltered. If you can't find good quality apple cider vinegar you could try making your own. This apple cider vinegar recipe has recipes for two methods of production. The one which uses whole apples will be of better quality for medicinal purposes, the one using scraps is quicker to make. You could make both so that you have something to use sooner while you wait for the whole apple batch to ferment.

A simple tonic can be made from 1-2 teaspoons apple cider vinegar, 1 teaspoon honey in a cup of warm water.

Where to buy the best quality apple cider vinegar
The next best thing to your own homemade cider vinegar is Bragg's Apple Cider Vinegar Raw, Organic, Unfiltered, with the ‘mother' which you can order online by clicking that link.