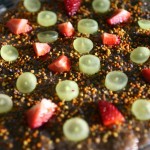 Chia seeds are an exceptional superfood, they are so full of goodness. I've had some around for a while and I've been using them in smoothies and just eating them dry. I also tried adding a tablespoon to a glass of water and drinking the resulting gel, which was wonderful and refreshing. But I really wanted to do something more with them, I wanted to use them in as a main ingredient in a dish. So I went searching online for recipes and came across a video called “Chiary Pudding” by Kate Magic.

Inspired by Kate's recipe and all the great things she says about chia, I put my chia seeds on to soak the next morning and came up with my own chia creation that afternoon using ingredients I had at hand. Just before I was going to put the pudding mix into the mold, Suzi came in from the garden with a handful of the first strawberries of the season. Perfect timing! They really gave the chia pudding an extra lift. Here's my recipe, along with the video that inspired it and the notes I took from the video.

Here's the video that inspired it all!

Recipe from the video:

Put into a mould (silicon moulds are good), sprinkle bee pollen on top, and put it into the fridge to set so you can cut it like a jelly, or you can eat it immediately.