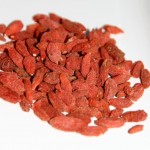 Goji berries (Lycium barbarum) are the most nutritionally dense fruit on Earth. They are a member of the nightshade family (Solonaceae), which contains many other common vegetables such as potato, tomato, eggplant, and pepper, as well as some poisonous plants like belladonna and deadly nightshade. Native to the Himalayan Mountains of Tibet and Mongolia, the goji berry is now grown in many other countries as well.

Although they have only been introduced in Western countries in recent years, gojis have been used for thousands of years in Tibet and China, both as a culinary ingredient and medicinally.

Unique among fruits because they contain all essential amino acids, goji berries also have the highest concentration of protein of any fruit. They are also loaded with vitamin C, contain more carotenoids than any other food, have twenty-one trace minerals, and are high in fiber. Boasting 15 times the amount of iron found in spinach, as well as calcium, zinc, selenium and many other important trace minerals, there is no doubt that the humble goji berry is a nutritional powerhouse.

This amazing little superfruit also contains natural anti-inflammatory, anti-bacterial and anti-fungal compounds. Their powerful antioxidant properties and polysaccharides help to boost the immune system. It's no wonder then, that in traditional Chinese medicine they are renowned for increasing strength and longevity.

In traditional Chinese medicine, the goji is said to act on the Kidney and Liver meridians to help with lower back pain, dizziness and eyesight. They are most often consumed raw, made into a tea or extract, or as an ingredient in soups.

Gojis are most commonly available in dried form, and make a great snack eaten as is, added to trail mix, muesli or oatmeal. They can also be soaked for a couple of hours in enough water to cover them. Then the soak water can be drained off and makes a delicious drink, or both water and berries added to smoothies.

Please note that there can be adverse interactions if you consume goji berries while also taking medication for diabetes, or blood pressure, or take the blood thinner warfarin. So be sure to consult your health care provider if that is the case.

Gojis can often be found in Asian food stores, but most of these come from the commercial growing regions of China and Tibet, and contain high levels of pesticides and synthetic fertilizers. Even some brands which claim to be organic may not be, so be sure to source your goji berries from a reputable source.