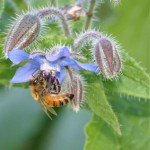 Honey bees are essential to our food supply. They, along with all other bees are facing a crisis right now. You might have heard of Colony Collapse Disorder, sometimes also called Spontaneous Hive Collapse. Bees are dying off at an alarming rate, and have been for some time now. The term Colony Collapse Disorder was used in late 2006 to describe the trend that bee keepers and scientists were becoming of aware of. It's a serious threat to our food supply.

Both honey bees and bumble bees are used in agriculture for pollinating crops. Bees pollinate many of our food crops, and of course are responsible for the production of honey as well. So, if the bees all die off, it's not just honey that we will lose. For the plants that rely on bees, in order for the plant to bear fruit pollination has to occur first. When I say fruit, it's not just what we typically think of as fruit, which are the sweet fruits. Cucumbers, avocados, squash, eggplant, and tomatoes are all fruits as well. Bees are also essential to the production of some nuts, such as almonds. What will we do without bees?

Already in China they have lost so many bees that they have to pollinate the popular ya/nashi pears by hand. Imagine if the same happened in the USA and Europe. With the minimum wage there it means the price of these foods is going to skyrocket.

Watch the video below which has some good information in it and then hop on over to this Kickstarter project if you'd like to support this project. The funding deadline is March 31st. Minimum donation is only a $1. I have absolutely no affiliation with this project or it's founders, I just think it's a good cause.

I know this Kickstarter project is a local one, and even if it is outside of your area, it's important. This venture, if successfully funded, could provide a test pilot and model that could be replicated in other areas. Whether or not you choose to donate, please share this through Facebook and whatever other social networking sites you engage in to help spread the word.