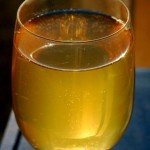 Kombucha is a tart and refreshing fermented beverage with a taste reminiscent of apple cider. It is loaded with beneficial yeast and bacteria that will help re-establish your healthy gut bacteria. In fact the weird, gel-like kombucha culture that resembles a jellyfish, is called a SCOBY. That's an acronym for Symbiotic Culture Of Bacteria and Yeast.

Kombucha is an ancient, home-made folk remedy. It was very popular in Russia and Eastern Asia. It was reportedly used by the Chinese 2,000 years ago. In the early 1950s Russian scientists did quite a bit of research into the beneficial properties of kombucha with respect to treating cancer after finding that there was an extremely low incidence of cancer among the people of certain regions, even though pollution and environmental toxins in those regions were so bad the trees and fish were dying. The scientists were doing a really thorough study of the food that was consumed and other reasonable habits these people had that may have been contributing to their exceptionally good health, given their conditions. They were baffled because they weren't really finding anything different that these people were doing. One day one of the scientists stopped by a house to interview the occupants and everyone was out, except for an old woman. She offered him a glass of kombucha, and he loved the refreshing taste of it. Having never encountered anything like it before he started asking questions, which led the scientists to discover that nearly every home was fermenting and drinking kombucha. It was the missing piece of the puzzle they were looking for. The people, of course, knew that this drink contributed to their good health.

The list of ailments that users report it helps with and the benefits is on par with apple cider vinegar. In other words, just about everything. Of course most of that is anecdotal evidence, and hasn't been evaluated by the FDA. So if you trust the FDA and have faith in their methods, just keep that in mind 😉

Note: if you are just starting out, you'll need to get a Kombucha Starter Kit. After that you'll be able to brew over an over, if you take good care of it, it will last indefinitely.

Put tea in a glass container (a heat safe container like Pyrex), add boiling water and let steep for at least 15 minutes. 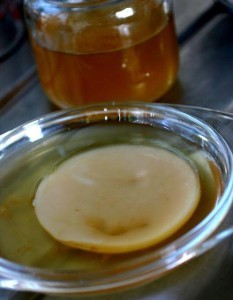 Kombucha SCOBY and starter tea waiting to go into a new batch.

Strain the tea into your brewing container. A glass container, something with a wide mouth is best. The SCOBY will do best when it gets plenty of oxygen, so the best environment for the SCOBY to develop is one where the container is wider than it is high. This is just a guideline for optimal brewing, many people successfully brew in a mason jar, and if that’s what you have available you’ll still produce a fine batch of KT (Kombucha tea).

Add sugar and stir until the sugar is dissolved.

Allow tea to cool to body temperature. Once cooled add the Kombucha tea reserved from previous batch (1/2 to 1 cup) then place the kombucha SCOBY (sometimes called a mother) in the liquid.

Cover with a clean tea towel or muslin with a tight enough weave to keep out fruit flies and other creepy crawlies. Make sure the cloth isn’t touching the SCOBY. Store in a warm place, away from direct sunlight for 7-10 days. The brewing time will vary depending on the temperature – the warmer it is the shorter the brewing time, the cooler it is the longer you will have to leave it to brew; and how tart (or not) you like it.

If you are interested in weight loss, studies showed that the best results were gained from kombucha tea that was brewed for 14 days.

The finished Kombucha tea should have a pleasant, tangy, slightly effervescent taste reminiscent of apple cider.
If the tea is still quite sweet, you have not let it ferment for long enough. During fermentation the yeast and bacteria feed on the sugar and the caffeine in the tea. As a result the finished product does not contain much sugar or caffeine.

Do some taste tests and experimentation to find out how you prefer your kombucha tea, then brew it to your taste.
If your tea is very tart and vinegary, you’ve let if ferment for too long. But you don’t need to throw it out if that’s the case. Some people like their kombucha tea like this. The apple taste seems to increase the longer you let it brew. I find the kombucha tea vinegar tastes nicer than apple cider vinegar does. Even if you find it a bit to tart to drink, try using some in a salad dressing, to replace the vinegar. It adds a really nice flavor that I prefer to all other types of vinegar, and you’ll still get the health benefits.

If you want to try some Kombucha vinegar, let your brew go to about 14-17 days.

Here’s a recipe for Rainbow Cole Slaw I made with Kombucha vinegar… it was delicious!

To start a new batch, use 1/2 cup kombucha from your matured batch. Separate the original SCOBY from its new child and use either to brew the new batch.

Since you now have 2 SCOBYs you can give one away to a friend, sell it, or start 2 batches. It's also a good way to experiment with different types of tea. Just in case you accidentally kill the SCOBY, you now have a backup. I've successfully made delicious kombucha tea from both Rooibos (a.k.a. Red Bush Tea) and Honeybush tea. If you end up with more SCOBYs than you know what to do with, you can put them on the compost or dehydrate them at 105 degrees and use them as dog chews. Or you can blend one up using a blender or food processor, adding a little kombucha tea as needed, and use it a facial mask. As with everything you put on your skin it's advisable to test a bit on a small patch of skin on the inside of your elbow.

This SCOBY can easily brew 2 litres, just double the recipe. The size of the original SCOBY doesn’t matter, the new SCOBY will grow to perfectly fit the container you are brewing it in. If you have a small SCOBY to start with you may just need to leave it to brew for a day or two longer.

What's that weird brown stuff floating in my kombucha?

You may find that there is weird, stringy brown stuff floating in your kombucha. Or the SCOBY start to have dark spots on it. While the SCOBYs can grow a black mold, it's quite rare. If you do genuinely have a black, furry mold growing on the top of your SCOBY you want to throw out both SCOBY and tea and start again. One time I tried to get the black mold to grow so I could take a photo. I abused those poor SCOBYs, in the name of education. In the end, I wasn't successful. So I don't have a photo of black mold to show you. Sorry. 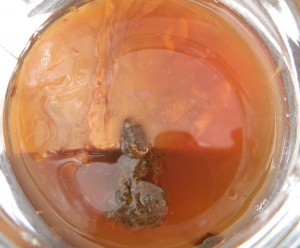 What I do have a photo of though, is something much more common, a weird-looking dark mass that new brewers often mistake for the black mold. But it's not. It's perfectly safe and harmless. In this photo to the left you can see it. It's not attractive, but it won't hurt you.

What happens is that when you brew the tea there are wee bits of fiber, bits of tea leaf and tea leaf dust, that remain suspended in the tea. The yeast and bacteria that make up the SCOBY have a very strong instinct to find each other and form a collective – that's what creates and holds the SCOBY together basically. Some of them seem to congregate around these bits of tea leaf, or attract the bits of tea leaf. I'm not sure which, but the result looks like that brown blob in the lower center of the photo.

While it won't hurt you, it does have a texture that will make you shiver and cringe should you accidentally suck it up and end up with it in your mouth while enjoying a glass of kombucha. You can prevent this experience by straining the kombucha into your drinking glass through a fine mesh tea strainer. It usually sinks to the bottom of the container, so most of the time I just carefully pour off the tea on the top. When I get down to the last bit, and my chances for avoiding ‘the blob' are not looking so good, I get out the tea strainer.

Where to buy Kombucha Starter Kits

So to get started brewing your own kombucha, you'll need to get yourself a SCOBY and some starter tea. Often this is referred to as a Kombucha Starter Kit. I recommend buying a kombucha starter kit from KombuchaKamp because they sell healthy, live SCOBYs. You can also find lots of excellent information and recipes for flavored kombucha, plus things to help your brewing efforts like warming mats, continuous brewing crocks (a real time and mess saver!) and other cool stuff.