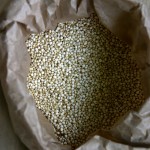 Quinoa is an ancient food that has been cultivated in the Andes mountains for at least 5,000 years. While it has been well-known in South America, it was virtually unheard of in North America until the 1980s. Considered sacred by the Incans, now it's hailed as a ‘super food', and has been classified as a ‘super crop' by the United Nations because of it's high protein content.

Pronounced KEEN-wah, quinoa is often thought of as a grain, and in fact it is often used in the same manner as many grains, but technically it's a pseudocereal, a seed. The quinoa plant also produces nutritious edible greens as well as seeds, but the greens are not as commonly available as the seed. The seed can be cooked and used like you would rice, barley or couscous. It also comes as a flour, for baking, and can be sprouted.

The amazing thing about quinoa is that it's very high in protein and contains all 9 essential amino acids. Besides being 15-18% protein, quinoa is also high in calcium, iron, phosphorus and vitamins E and B, and contains a good amount of all-important fiber too.

Because of it's high protein and complete amino acid makeup, quinoa should be considered a staple in any vegan's or vegetarian's diet, but you don't have to be a vegetarian to enjoy it. It's so high in protein that only half a cup will fulfill a child's protein requirements.. It's extremely versatile, being used in both sweet and savory dishes, puffed, rolled, and ground into a flour. The real clincher though, is that it tastes great too.

Quinoa is high in saponins, which have been found to have anti-cancer properties. Saponins block the development of cancer and boost the immune system. Saponins, also found in chickpeas and responsible for the layer of foam that appears on the top of the water during boiling, produce a bitter taste. The taste discourages birds and insects from from eating the seed – it's the plant's natural defense. Despite their anti-cancer benefits, saponins can be mildly toxic in large quantities. Even though most quinoa sold commercially has been processed to remove most of the saponins, it's a good idea to rinse well before cooking.

How do you cook quinoa? 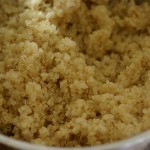 Quinoa is easy to cook, and it takes only 15 minutes. You need 2 cups of water for every 1 cup of dried quinoa.

Put the quinoa in a fine sieve and rinse thoroughly under running water. Put 1 part quinoa to 2 parts water and a dash of sea salt into a saucepan. Bring to a boil on high heat then turn down to simmer, partially covered, for 15 minutes. If there is excess water in the bottom of the saucepan, remove lid and continue to cook for another minute or so until it evaporates.

How To Use Quinoa

The cooked quinoa can now be used in savory dishes as you would use use rice or couscous. Added to bread dough or pancake batter it boosts the protein content and adds a nice texture. Or you could add dried fruit, honey, milk and cinnamon for a sweet breakfast porridge.

No matter how you use it you'll find quinoa as delicious as it is nutritious.

Where To Buy Quinoa

You can Buy Organic Quinoa