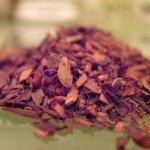 Rooibos Tea also known as Red Bush Tea is not a true tea but a herb which is indigenous to South Africa. Due to its widely publicized health benefits, including it's anti-aging effects, it has grown into a billion dollar export industry since the mid twentieth century.

My favorite way to drink rooibos is Yogi Tea Rooibos Chai. It's delicious just as is, but you can also add milk and sweetener to make it more like a traditional chai. The Yogi Tea company makes very high quality teas using organic ingredients. They focus on the health benefits of each blend but they also make sure the result tastes good.

Rooibos tea has no caffeine and only half the tannin of ordinary tea. Apart from being refreshing to drink, in place of ordinary tea and coffee, it has the advantage of containing minerals and powerful antioxidants. Having no oxalic acid it also does not irritate the kidneys.

Japanese scientists, who did studies in the 1960s, discovered Rooibos contains a powerful antioxidant similar to SOD which is thought to retard aging and quercetin which is believed to have potent anti-inflammatory properties. Besides that Rooibos is also found to contain aspalathin which counteracts the atherosclerotic processes that result in heart disease. Due to this the Japanese promote it as an Anti-Aging Tea and import large quantities of the tea.

Research was done elsewhere where the French found that hair lotion containing Rooibos promoted faster hair growth with improvement in the hair condition and caused no allergic reactions. In South Africa research found that the polyphenol content in Rooibos is similar to green tea. Polyphenols help protect the body from damage by free radicals.

Rooibos has been found to be helpful with general health problems. It relieves digestive problems, nausea, vomiting, stomach cramps and constipation. Having a calming effect it helps with irritability, insomnia and depression.

Both pre-natal and breast feeding mothers supplement their intake of manganese, calcium and fluoride drinking Rooibos and therefore promote strong teeth and healthy bones in their babies. Rooibos, when applied at every nappy change, relieves nappy rash and when drunk by the baby relieves colic.

Preparation of Rooibos is the same as ordinary tea. First warm the tea pot with boiling water and then place one teaspoon of tea or tea bag per cup required in the pot. Pour over boiling water and let infuse for a few minutes. The longer it is left before drinking the more antioxidants the tea will contain. Can be served plain, with hot or cold milk or lemon. It can be lightly sweetened with honey or sugar or just left without any sweetening. Rooibos also makes a wonderful ice tea.

In South Africa Rooibos Tea is often used in day to day cooking as not only does it add important minerals and antioxidants to the diet and help digestion, it also enhances the flavors of the cooking. Just replace the water in a recipe with the tea.