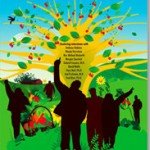 Simply Raw and Raw For Life

Back in the 1980s I went raw. I was hired as a chef in a vegetarian restaurant that also featured raw food. It was my first introduction to raw and living food, and it was great being able to try everything. But because I was also making cooked food, and I'm good with creating new recipes, but I have to try it as I go along I was also eating cooked food.

Later, after I left that job and was working to set up a deli in a large health food shop, I ended up going raw without even realizing it at first. I was living in Florida at the time. I had a champion juicer, which I loved and I made fresh fruit and vegetable juice and fruit ice creams daily. At work I'd have a huge heaping plate of raw salads from the deli, usually with a big piece of marinated tempeh. Of course, Florida has just great fruit, and young coconuts were easy to find and inexpensive. So most of what I ate in a day was raw. And an amazing thing happened. My body never did really well in really hot (or cold) climates, and in Florida I'd get exhausted easily in the heat, I would avoid going outside for long in the middle of day because it was just too much for me. All my life I had always felt like I didn't have enough energy. But a couple of weeks after falling into this mostly raw diet I started running on my lunch break. I'd come back dripping with sweat, but feeling great and full of energy. It was the hotest time of day and it didn't even phase me! I'd spend the rest of my break eating my huge salad. I found I didn't need as much sleep, yet my mind was clear and I felt really rested. I realized I never smelled bad, even when I was sweating profusely, and I didn't have bad breath, even first thing in the morning. I had more energy than I could use, for the first time in my life. When it finally hit me that I was eating a mostly raw food diet, I realized that was responsible for all the positive changes I noticed and why I felt so great all the time.

Sunday, April 25th is Reversing Diabetes Action Day. Health experts will come together to spread accurate and effective information on how to reverse diabetes. In honor of this day the team behind the film “Simply Raw: Reversing Diabetes in 30 Days” is giving away their film for an amazing 50% OFF the regular price. You can get it here.

If you haven't yet seen this film, I can tell you it's totally inspirational. We are told that diabetes is incurable. One of my favorite parts of the film is when Dr Gabriel Cousens is talking to the participants shortly after they arrive, and he says, “for me, diabetes is really easy to cure.” How often have we heard that? But it's true, as he goes on to prove it – both type 2 and type 1 diabetes. I was amazed at how quickly the participants were able to come off their insulin.

The film also features the actor Woody Harrelson, peak performance coach Tony Robbins, Rev. Michael Beckwith from “The Secret,” Morgan Spurlock from “Super Size Me,” Dr. Gabriel Cousens and David Wolfe, Dr Fred Bisci who's a pioneer in the field of health and nutrition and an absolute hero of mine, and more. This is definitely a film worth watching. Even if you don't have diabetes (I don't, and I'm so glad I saw this film).

You can also get the companion 2-DVD set to “Simply Raw: Reversing Diabetes in 30
Days” for 50% OFF which is totally worth getting. In fact, even if you don't have diabetes and aren't interested in watching Simply Raw, this 2-DVD set called “Raw For Life”. The “Raw For Life” DVDs have lots more information about how to raw, and the benefits, as well as guest spots with many raw food chefs showing how to make some of their favorite recipes. This is the set that I'll watch again and again. It's a great resource if you are interested in eating a raw food diet.

Whether you're in perfect health or suffering with diabetes or any other health issue I highly recommend you watch both “Simply Raw” and “Raw For Life”. It's a powerful, emotional and educational film that is a must see for anyone who cares about their health. You can watch the trailer and read about what the Simply Raw team is doing here.

Diabetes is a pandemic situation with over 246 million people suffering worldwide. If you or anyone you know is dealing with diabetes make sure that they watch this film. It just may save their life…

The 50% OFF is a ridiculously low price for the film. Plus they've added so many great bonus products to it that it's just a must-have if you're really interested in healthy eating. Check it out: